Have you heard my name?

It’s not a secret that I hide.

It may not be up in the stars

But I wear this badge with pride.

It comes from simple observation

From wobbles in my tum

No six pack will you find with me

Though apparently a nice bum.

They call me chunky monkey

And my moobs are there to see

I may not be a George Clooney 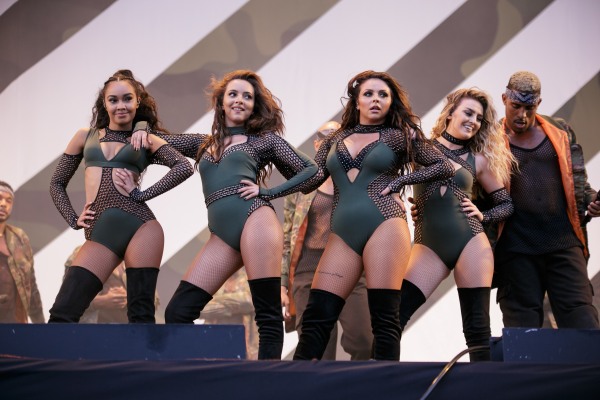 I have heard some crazy things in my time but the latest one to catch my attention is this craze about women having thigh gaps and what can only be referred to as a “bikini bridge”. And honestly, I’m quite bemused, appalled and flabbergasted all at the same time.

I first came across the theory of the bikini bridge and indeed the “attractiveness” of the thigh gap on a TV show called Naked Attraction on the UK TV channel, Channel 4. The show, presented by Anna Richardson, has a clothed man or woman select two contestants from six naked men or women whose bodies and then faces are revealed in stages from the feet up. He or she then takes of their clothes to select one of the two finalists to go on a clothed date. Now, I don’t get shocked too easily but this show blew me away. Never before had I ever seen something so superficial. I mean, literally a woman would eliminate a man from the competition for his penis being too small or a woman being eliminated by a man for her lady bits sticking out too much. There is no way you can watch this show without feeling a million times more self conscious about yourself. And hey, I already hate my body! But anyway, so there was this one guy in the episode I did watch who was looking at his selection of girls and giving some rather intriguing reasons why he wanted to eliminate each girl. And while I won’t bore you with every answer, one took me by surprise.  He eliminated one girl because she didn’t have a gap between her thighs.

Now apparently this is a thing even though I couldn’t quite believe what I was hearing. The guy on the show said that women with gaps in between their thighs are more flexible and better in bed. Further research into this craze led me to Wikipedia which stated that “The idea of the thigh gap received widespread news coverage in December 2012 after the Victoria’s Secret Fashion Show which featured several models with thin thighs. Images of thigh gaps featured in “thinspiration” blogs and across social networking sites. The Twitter account Cara’s Thigh Gap was started which used images of Cara Delevingne as an example of thigh gaps.”

I mean, okay, I have heard women talk about their thunder thighs before – something I have never truly understood – but this all seems a bit mad.

My research however led me further into the dark abyss of body shaming.

Bring on the bikini bridge. No, I can’t believe this is actually a thing but it is. This term apparently originates from as recent as 2009 and is defined as when bikini bottoms are suspended between hip bones, causing a space between the bikini and the lower abdomen. It started off as a hoax that got all too real when fake endorsements from celebrities such as Harry Styles and Justin Bieber made girls want to have this ridiculous look. Newsflash, it has no benefits whatsoever. 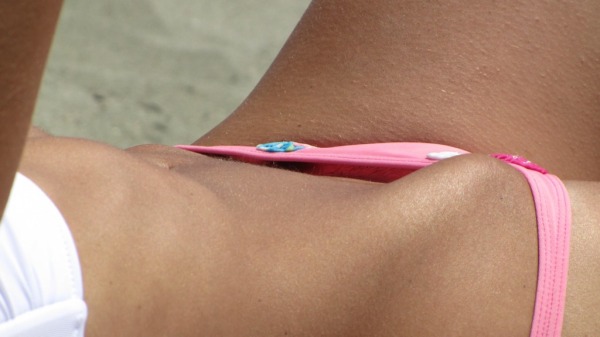 Girls, I’m going to let you into a secret. Thick thighs are not a bad thing. And nobody cares about bikini bridges. Trust me, if you are in a bikini, no guy with half a brain is going to be thinking “I wonder if she has a bikini bridge”. Actually thick thighs are REALLY SEXY. Little Mix recently performed “Shout out to my Ex” live on TV and all the girls bared their thighs. Each of them are of different proportions and not one of them looked unattractive. Far from it!

Basically, this comes back to a fundamental point that I have hammered home time and time again on my blog and that is that beauty should not be categorised as some object preset that all girls (and guys) should aspire to. Of course, some people will have preferences and the reasons behind that are intriguing. Indeed, a question whether this is a natural attraction or whether this is brainwashed into us from an early age as to what we should like. Body shape has no indication on what sort of a partner that person will be, how giving and understanding they will be. You could have the most “beautiful” woman in the world but if she is selfish and uncaring, she’s going to be a pretty shoddy partner. Body shape is no indication of how good a protector that person will be. After all, we don’t live in the Stone Age and a man doesn’t require brute strength to be “the man”. Frankly, if you want a meat head, that’s fine but I might be busy when you require something technical doing. Sorry about that. But more importantly, beauty and “perfection” comes in all shapes and sizes. When I think about my ideal partner, I don’t think about thigh gaps, perfectly flat stomachs or bikini bridges. Frankly, if she is in a bikini full stop, I’d be very excited regardless of the dimensions. It wouldn’t be about perfect cup sizes or big butts. But it would be able the moments we share and the intimacy that we have. If I can find a woman that cares about me enough to share her time with me, go through trials and tribulations together and generally be there for one another. To meet someone who I can connect with on every level, then I can guarantee you she will be the sexiest thing in my world. I have no schematic for that. In fact, the gap in between her thighs is the last of my concern. Lol, I realise I’m rambling here somewhat but you get my point, right? At the end of the day, everyone has beauty. The things that make them unattractive are usually not even physical. They are habits, actions and personalities. They are how that person chooses to be. These are the things that matter, at least to me. But maybe that’s why I’m single?  Who knows?

Either way, I will love you and leave you.

P.S. Marilyn Monroe never had a thigh gap and she is considered one of the most beautiful women of all time…

Recently, I’ve been reading some very interesting articles as well as Reddit posts and Yahoo Q&As on a topic close to my heart. As someone who has always struggled with his weight, I have always found it difficult to form intimate relationships with people of the opposite sex. You see, you get this idea that you are worthless; that you are unable to attract women because you are fat and half the time you don’t even bother trying. It’s tough. However, my experiences as a singleton are far from unique. In 2011, 70,000 men were polled by ASK and Cosmopolitan Magazine indicated that nearly half of the men they polled would dump their girlfriend if she was “fat” while nearly 25% of women polled would dump their partner if they got fat. It’s really a rather disturbing statistic. 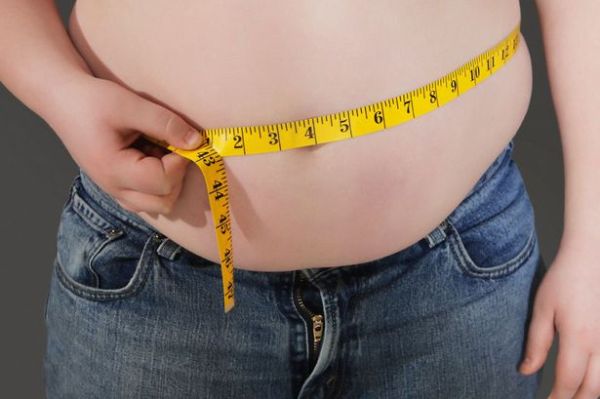 I was wondering what your thoughts were on dating someone that was overweight. I don’t want to get too serious about the whole situation or play the proverbial violin. I realise you ladies don’t want to get squashed making love after all! (Though you do know that the guy doesn’t have to go on top!). But it’s a hard one. I realise that initial attraction and attraction in general is more than just a personality thing. You can find a person to be enchanting, inspirational, brilliant and so forth but that doesn’t mean that you want to sleep with them. Physical attraction isn’t something that you can completely ignore. I understand this. Yet, I find myself quite bitter about it anyway. I guess it’s partly because of the stigma attached with being a fat person. If you are fat, then people think you are lazy or that you don’t care about yourself or your appearance. They think that all you do is eat junk food. In many ways, they treat you like a subhuman. I’ve been walking down the street before and I’ve had someone wind down their windows just to make fun of me or to throw something at me. Yes, I am 20 stone. Am I happy about this? No. Is it because I’m lazy? No. Actually, in 2012, I became extremely unwell. I ended up in critical care in fact. I lost nearly 7 stone in weight and was at a great natural weight. But then, as the months went on, so did the medications – medications that I needed to get through the day. Sadly, the consequence of this was some quite heavy weight gain. And now that I find it hard to exercise vigorously because of my health, the fact that these drugs negatively affect my metabolism means that I have gained substantial weight. Does it make me look attractive? Okay, probably not. But when people use that as a reason not to be with you, it sucks. Like I said though, I DO understand. I really do. It’s an attraction thing and you can’t ignore it. Plus I have a big nose ha ha so that can’t help.

I do really love this “body positivity” movement though. Just check the Body Positive Babe who has a blog here. I have the utmost admiration for her and her confidence. Her photos also do little good for my blood pressure too I should add! But I wish I had her confidence. People shouldn’t be ashamed of how they look! I think that it’s important that people stay healthy, and I mean that not to impress others but purely for longevity. But then again, it’s your life and you can choose what to do with it. However, the idea that people would dump their partner just because they were too heavy makes me very sad. It’s the implication that your weight is such an important factor to someone that they would again use it as a reason not to be with you. It’s not really that fantastic a romance is it? It’s saying – “you were fun to be around but now you are chunky I’m no longer interested”. How do these people survive pregnancy?

It’s not too surprising that people think romance is dead these days. The great love stories of old spoke nothing of true love that was maintained by a treadmill. Imagine Romeo and Juiliet…”Did my heart love till now? forswear it, sight! For I ne’er saw true beauty till this night. ” – unless she gets fat, then I’ll be off alright!

What I’m really saying in the end is that while I understand that people say there is a need for an attraction, or even a physical attraction, is this attraction really that binary? Should every man look like Jared Leto and every woman look like Beyoncé? Is attraction really that straightforward? Can it be measured by the definition of your abdominal muscles or by the size of your breasts? I really hope we don’t live in a world that superficial.